“Merry CHRISTMAS,” I am greeted by my coworker with a very emphatic Christmas greeting when I walk into my office.

“Um, Merry Christmas to you as well. Why the militant Christmas greeting this morning?”

“I’m just so TIRED of getting all these “Happy Holidays” cards. It’s CHRISTMAS. That’s what we’re celebrating, right?”

“That’s what you’re celebrating.” I shot back with a wink, letting him know I was being intentionally obnoxious, and not just my regular humorless* godless self.

“Yeah, yeah- I know other people are celebrating other holidays.” He sounds the tiniest bit apologetic.

*My coworkers are sort of assholes when it comes to their religious beliefs. I rarely talk about my (lack of) beliefs because these guys are pretty PRO GOD. I said “Holiday Party” when referring to our department’s annual “Holiday Party” last year (because that’s what it’s called) and the old man almost lost his shit. “IT’S CHRISTMAS! CHRISTMAS, GODDAMMIT!” And then he called me a heathen and a pagan (I know, I didn’t even bother) for months until I told him I was going to go to HR if he didn’t knock it off.

“There isn’t really a war on Christmas, you know,” I’m totally being more obnoxious than necessary. My coworker watches Fox news and occasionally we talk about how ridiculous some of their stories are, but for the most part he seems to find their coverage “fair and balanced.”

“I KNOW there isn’t a war on Christmas!” Now he sounds defensive. (Muhahaha, JUSTICE)

I pour my coffee and sit down at my desk. “Chill out dude. We “celebrate” Christmas at our house and we aren’t even Christian.”

And we do celebrate the holiday. We have a tree. We do gifts and cards and Christmas lunch. Pretty much the whole shebang without the Jesus part.

However, growing up Catholic, Jesus was a central figure in my childhood Christmas celebrations. Pageants and Advent and midnight Mass were all annual traditions that put Jesus front and center, not just on Christmas morning but also for weeks before and after the holiday.

My move away from the church began when I opted out of confirmation at the age of 16, and I stopped going to Mass altogether when I joined the Army at the age of 17. After I came home from Iraq, I wasn’t quite an atheist, but I certainly wasn’t Catholic anymore. My “nuclear” family is very secular: My husband identifies as an atheist, and while I don’t typically define my lack of religious beliefs as atheism, for simplicity I’ve done so here.

Sometimes I feel a deep nostalgia for the parts we leave out of our Christmas celebrations now, and I miss the traditions that made the holiday meaningful to me as a child. The advent wreath that used to take up residence on our dining room table four weeks prior marked the beginning of my restless and impatient anticipation of Christmas morning. During the four weeks preceding the 25th we would light a candle marking each week. The first week, we lit just a single purple candle, the second week, two purple candles, the third, three candles (one pink and two purple), and the last Sunday before Christmas we would light all four. On Christmas day we would light a snow white candle placed in the center of the wreath. 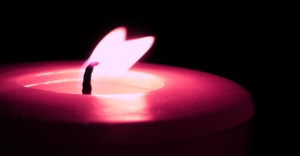 Around the same time we put out the advent wreath my mom would always set up her nativity scene, sans baby Jesus and the three kings- those figures would make their appearance on Christmas morning. Infant Jesus would appear in his manger, his little plastic hands and feet so tiny and perfect; the three kings would turn up near the kitchen, the starting point of their 12-day journey across the living room. The star on top of our tree was the star they followed to see the newborn king. I would wake up and make sure the little plastic baby was in his place, sometimes before I even looked under the tree. Baby Jesus in his little manger and the glow from all five candles on the wreath made it feel real.

Now I wake up on Christmas morning and feel like I’m just going through the motions. I’m happy to be with my family but there are some gaps; the way I celebrated as a child felt like it had purpose and meaning. Now that I no longer believe the story behind the traditions, the day rings a little hollow. But as much as I miss my childhood traditions, repeating them now would feel dishonest. Much of my melancholy stems from knowing I can never be in that place again, that place of pure belief and faith that everything is as it should be and that all the stories you are told are true.

My boys are 7 and 8 years old this year. We have our own traditions, and maybe it feels just as real to them as it did to me when I was their age because this is what they know. What I know is that they’ll find religion (or not) on their own terms and repeat (or not) the traditions of their childhood because they want to, not because those traditions are all wrapped up in religious dogma,

I’m not slamming the dogma- I get it. My love of the traditions of the Church and my identity as an Irish Catholic operated as a security blanket and insulated me against my own unspoken doubts for a very long time. I felt that my identity as a Catholic was inexorably wrapped up in who I was as a person and it wasn’t until I spent a year in Iraq, in some very extreme and isolated conditions away from the warmth of religious tradition and repetition, that I felt brave enough to face those questions and doubts.

I don’t talk to many people about why they are atheist or agnostic, (or why they used to be Christian but chose to leave their church) but I imagine it wasn’t a decision made lightly. And it probably wasn’t because 45 people said “Happy Holidays” to them instead of “Merry Christmas.”

mainstream that shit
Sex and Society

a journal of experimental and intermedia writing and art

TELL DOW TO REPURPOSE THE JAIL AND COURTHOUSE BUILDINGS NOW

This site is all about ideas

From reflections on war... onward to advocacy and action

My journey - The good, bad and the ugly

My life as a teenage feminist

Musings of a Progressive Realist in Wonderland

Accidents of Faith and Nature

News feminist philosophers can use

Make Me a Sammich

GATE
a gentleman and a scholar

trans politics, too many books, a great deal of music, assorted ephemera.